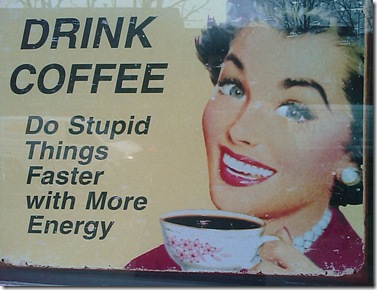 A new study published today suggests that drinking five cups of coffee a day could reverse memory problems seen in Alzheimer's disease. But actually it doesn’t. The article on the BBC website goes on to report:

"This research in mice suggests that coffee may actually reverse some element of memory impairment.

"However much more research is needed to determine whether drinking coffee has the same impact in people.

"It is too soon to say whether a cup of coffee is anything more than a pleasant pick me up."

So the effect of this reportage is misleading. The headline is memorable (“Coffee ‘may reverse Alzheimer’s’”) which is at odds with the detail at the end of article. The behavioural take away is more than likely “I know, I’ll make sure I drink more coffee” legitimising an existing habit based on largely unproven evidence. At least this report nullified itself in one place, rather than selectively quoting from a study to support its own baseless argument.

I’m picking on coffee in this instance, but this is just one of many examples where the media report on research studies exaggerating the conclusions and leading with speculation.

That said, there are exciting developments in the field of neuroscience and our understanding of brain chemistry that should lead to genuine treatments and supplements that support memory and improve our capacity to learn faster and perform more effectively.

A diet of HDL cholesterol, blueberries and coffee may be part of the answer. But beware you don’t still end up doing stupid things albeit faster and with more energy.