Transfer of Learning - missing in action? 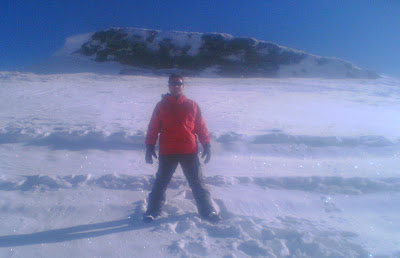 After a short break skiing in the Swiss/French Alps (the break fortunately not involving any bones), I found myself thinking further about how much (most?) training activity across the planet fails to transfer into any lasting learning.
When I learned to ski some 20 odd years ago, I started out on a dry slope which, back then, was more like skiing on a thick, plastic carpet with the consistency of lumpy porridge. However, this "simulated" environment allowed me to practice basic techniques, such as when and where to shift weight from one leg to another, position of skis in relation to the line of the slope, controlling speed (although on the slope I learned on I'm sure the top speed achievable was no more than 10 km/hour!).
When I subsequently arrived at the Alpine resort and nervously snapped into my skis at the top of a real slope with real snow, I was delighted to find it was a far easier, smoother and exciting experience - from there I was hooked. The techniques I learned did manage to transfer and I dramatically improved from that point on. In this case then, an opportunity to practice, even if a pale imitation of the real environment, can lead to better performance standards reached in less time.
So what happens when the simulated environment starts to approximate the real time experience itself? Surely this will lead to an even faster way to acquire experience that can be directly applied?
Well, for years the aviation and defence industries have recognised the power of simulation in training how to use equipment (itself often worth $millions) in stressful, life and death situations. Big budgets were (and still are) available to spend on highly innovative technology and this continues to be the case. However this visualisation and real-time interaction is going mainstream now that gaming are firmly in our living rooms and pockets.
Here's a great (if un-scientific) example of how simulation can transfer to the real environment. Wired reported:
A North Carolina man who saw an SUV flip and roll on a highway last November was able to provide medical aid to the victims with skills he learned from the America's Army, say the videogame's makers. Paxton Galvanek pulled one of the passengers out of the smoking car, then found another bleeding heavily from his hand where his fingers had been lost during the crash.
"I used a towel as a dressing and asked the man to hold the towel on his wound and to raise his hand above his head to lessen the blood flow which allowed me to evaluate his other injuries which included a cut on his head," Galvanek said in a letter to the America's Army design team. Galvanek said he learned about controlling bleeding from playing section two of the "medic" class training in America's Army, a game developed by the Army as a recruitment tool.
"I have received no prior medical training and can honestly say that because of the training and presentations within America's Army, I was able to help and possibly save the injured men," Galvanek said.
Now many may say that the knowledge applied is basic common sense, however as this great comment on the article states:
You'd be surprised how little most people know about first aid. In the Army we say "common sense is not so common". The truth is any of the supposed "common sense" things need to be learned. Just to have an order of things to check for can save lives, because the brain goes back to the training when in panic, while your "common sense" (aka. cognitive thinking) c***s its pants. Just remember this mantra:
"Really Big Boobs Should Fit Both Hands" = "Responsiveness - Breathing - Bleeding - Shock - Fractures - Burns - Head injury".
Now that's memorable (though I doubt this would get past the HR discrimination policymakers - even in the armed forces these days)!
Repetitive practice and simulation is at the heart of effective training. But this seems to only be present where the consequences can mean the difference between life and death. Too often corporate training programmes render themselves impotent and totally ineffective by failing to consider the transfer process. We should not be surprised when staff behaviour does not change.
I'll be looking at techniques that promote the transfer of learning in more depth.

I've thought for a long time now that most training interventions consist of far too much input and nowhere near enough practice. A typical soft skills workshop allows for one role play practice, which is just enough to find out that you don't know what you're doing. It can take hundreds if not thousands of practices to make a skill automatic and the training job isn't done until that point is reached.

Clive, I totally agree. It's crazy to think that in the early days of interactive video, a lot of focus was placed on designing believable practice scenarios that could build a learners' confidence so that a subsequent workshop could concentrate on further practice. Beyond that managers and coaches still fail to provide early guided practice when back in the job, so that the newly learned behaviours can be cemented into "business as usual".