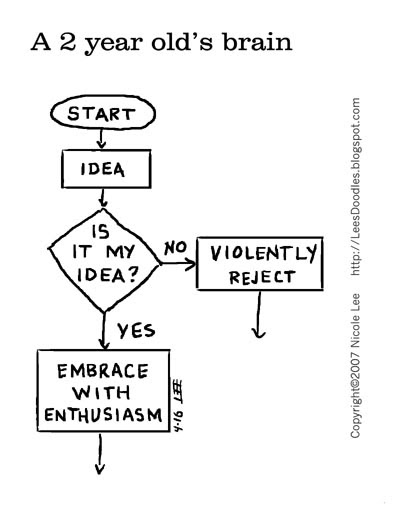 A nice little Doodle by Lee. This behaviour is undoubtedly not limited to toddlers - just watch an episode of The Apprentice or spend some time in any large organisation. Interestingly, the act of doodling (like the example above, but of course they come in all shapes and sizes and colours), often perceived as a sign of boredom and disengagement, is actually a highly effective means of enhancing memory recall in situations which happen to be less than fully stimulating in their own right.

According to Jackie Andrade, a professor of psychology at the University of Plymouth, the brain is designed to constantly process information and when deprived of anything stimulating will go into overdrive creating its own fantasy worlds and daydreams. The act of doodling provides just enough cognitive stimulation to prevent the brain from opting out completely from the immediate reality a person finds themselves in.

Andrade tested this theory by playing a lengthy and boring tape of a telephone message to a collection of people, only half of whom had been given a doodling task. After the tape ended she quizzed them on what they had retained and found that the doodlers remembered much more than the nondoodlers.

"They remembered about 29 percent more information from the tape than the people who were just listening to the tape," Andrade says.

So doodling doesn't detract from concentration. On the contrary, a slightly distracting secondary task may actually improve concentration during the performance of dull tasks that would otherwise cause a mind to wander.

"The exciting thing is that people actually got better while doing two things at once," said Andrade.

This is interesting given other research that claims we cannot multitask effectively, despite our more fragmented, multithreaded life styles.

Underline all strong features and strengthen insufficiency or lack of exactitude when doing a research for you or me on a daily basis. Being a student you should always remember to learn from everywhere and remain stable as we know how to write the best term paper on artificial intelligence is believed to do by all greatest mind of past centuries.

Entrepreneurs and innovators are on the rise in this digital age. The one thing that gives them the edge is communication which is why they use the latest trending channels like mass texting service to exchange valuable information with prospects.